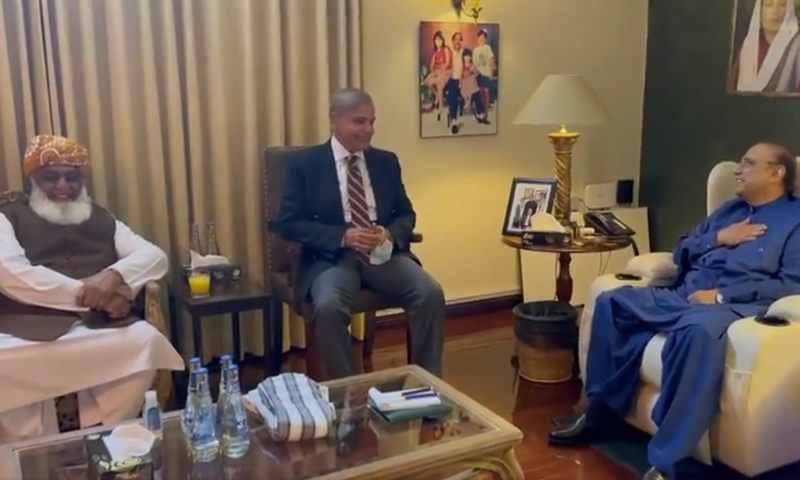 According to a statement by the PML-N, the current political situation and the opposition’s plan to table a no-confidence motion against the government were discussed in the meeting.

Earlier, Fazl had announced that the PDM would be holding a crucial meeting with the PPP at the “leadership level” today.

He had said this while speaking to the media in Islamabad after a meeting with PPP’s Khursheed Shah, who was standing alongside him during the press talk.

“So far, the information that we have shared is encouraging and God willing, the nation will see results that will meet their expectations,” Fazl said.

Moreover, Khursheed Shah said the details of the meeting would also be shared with the media.

The meeting between the PDM and PPP took place as the opposition stepped up efforts to table a no-confidence motion against the government.

On February 11, Fazl had announced that the PDM would be tabling a no-trust motion against the premier and will take the government’s allies on board to ensure that they had enough votes in the National Assembly to succeed.

Since then, an apparent bonhomie has been developing between opposition parties on this front, with the PDM and PPP joining hands to make the no-confidence move a success.

The opposition had been reaching out to the Pakistan Tehreek-i-Insaf’s (PTI) allies in the centre to seek their support, notably the Pakistan Muslim League-Quaid.

Last week, PDM spokesperson Hafiz Hamdullah had issued a statement that quoted Fazl as saying that the opposition would submit the no-confidence motion in the next 48 hours.

While the plan is yet to be realised, Fazl told media persons today that the no-trust move would be tabled soon.

When a reporter pointed out that the opposition had not given a final date for submitting the confidence motion, he replied: “We have always played this game with you. We never share all details and keep some hidden. And this keeps you busy. [We are employing] that tactic here [as well].”

Moreover, PPP’s Shah said the time for tabling the no-trust move would be discussed and decided at the meeting with PDM leaders today.

To a question about whether the PDM had the support of the PTI’s allies for the no-trust move, Fazl said, “When we say the majority is united against them (the PTI), understand for yourself what this means.”

In this regard, Shah was asked whether opposition parties had finalised matters with the ruling party’s allies.

To this, he said, “Everything will be fine. Don’t worry.”

In reply to another question about PPP having invited the PDM to join its anti-government march, Shah said Fazl had been invited but the meeting that was to take place today was the priority and “these matters will be decided there”.

When Fazl was asked whether the opposition had the support of estranged PTI leader Jahangir Khan Tareen, he said he was not in contact with him.

To another question about the chances of opposition parties staying united against the government, he explained that each situation had a different requirement and “we have to forget the past”.

He said there may be disagreements and differences between political parties, “but I believe that even the public would not appreciate if we repeat our actions of the past”.

Asked to respond to a hard-hitting speech by PM Imran in Vehari yesterday, in which he warned the opposition to be prepared for what he would do to them once their planned no-confidence motion against him failed, Fazl remarked, “This is the real Imran,” who used offensive language.

He said the no-trust move was a political process and “who is he to threaten us”.

“Our workers, too, have clubs … in their houses and ready to fight on every front,” he added. Anchor Mishal Bukhari passes away at 38 Mishal Bukhari, a renowned journalist and anchorperson, has passed away at the age of 38 after battling cancer for two years, Daily Jang reported.

The news of Mishal’s demise was announced by her husband, Ameer Abbas, who is also a renowned anchorperson, on Twitter.

The funeral prayers of the journalist will be held at 1pm in Jamia Masjid-al-Muntazir in Lahore today.

Mishal, who was an award-winning broadcast journalist, was born on  July 8, 1984, in Karachi. She started her career as a news anchor on a private TV channel. She also worked for Pakistan Television.

The news of her sad demise triggered an outpour of reactions from fellow journalists and politicians, who offered their condolences.

“Remembering #mishalbukhari our host #AppTV who lost battle against cancer in Lahore on Tuesday evening. Thoughts of our team members with whom she worked are with her parents, family,” wrote Rauf Klasra.

In July 2022, the news of sudden death of Hussain sent shock waves across the country. This was followed by the tragic death of Sharif, who was shot dead in a case of “mistaken identity” by Kenyan police in Nairobi in October.

Later in December, Aslam, a giant of journalism, passed away during the course of treatment at a local hospital.