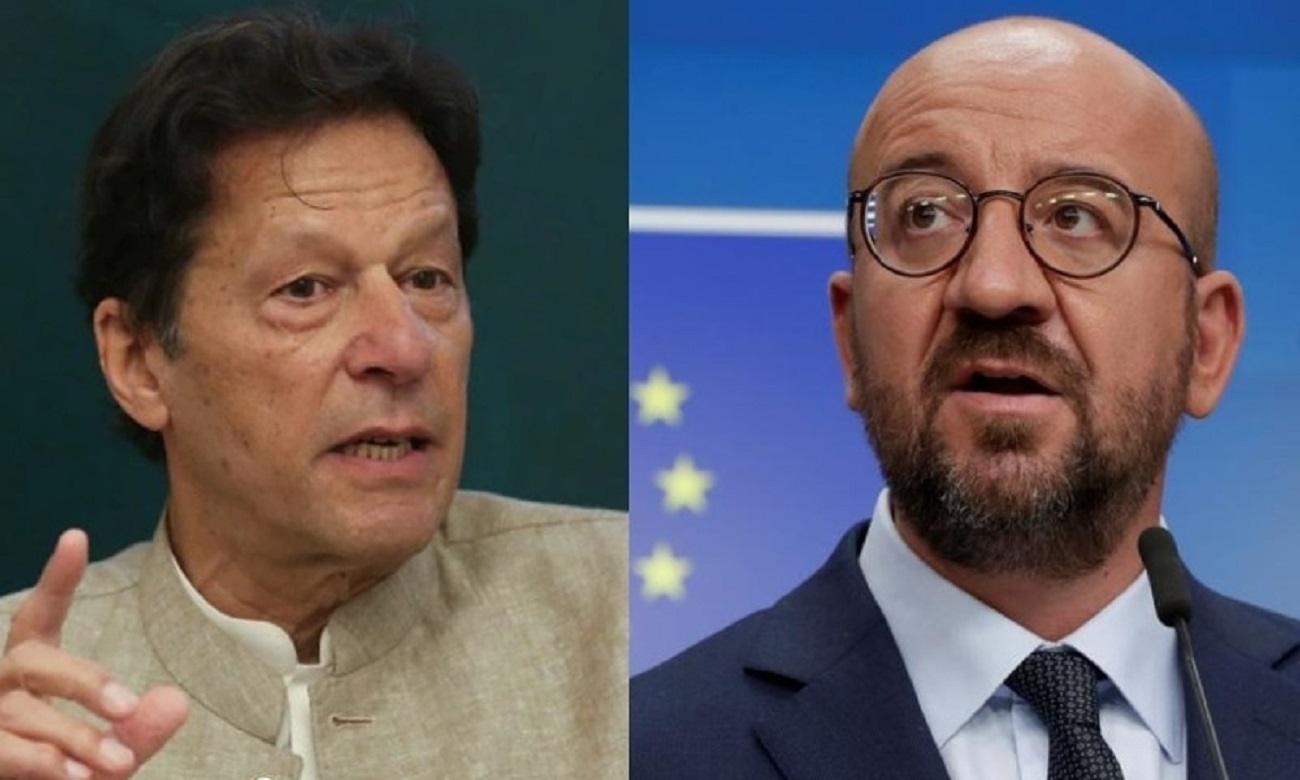 Prime Minister Imran Khan received a telephone call from European Council President Charles Michel on Monday and reiterated the call for finding a solution to the Russia-Ukraine conflict through “dialogue and diplomacy”.

The premier posted the update on Twitter, saying he shared concerns over the continued military conflict, highlighted its adverse economic impact on developing countries and stressed the urgent need for a ceasefire and de-escalation.

“I emphasised the importance of humanitarian relief and reiterated [the] call for a solution through dialogue and diplomacy. We agreed that countries like Pakistan could play a facilitating role in this endeavour. I look forward to close engagement to promote shared objectives,” he said.

Later, in a detailed statement, the Prime Minister’s Office (PMO) said PM Imran expressed “deep concern” over the military conflict and stressed that further escalation would have a negative impact on the region and the world.

“The prime minister added that he had been persistently highlighting the adverse economic impact of conflict on developing countries,” the statement said.

Emphasising that Pakistan had maintained a principled position that it would only be a partner for peace, the premier stressed the urgent need for a ceasefire as well as the importance of humanitarian relief for civilians in Ukraine.

“The prime minister underlined that Pakistan had friendly ties with Russia and Ukraine and had remained in close contact with both sides. The prime minister expressed the hope that the dispute would be resolved through dialogue and diplomacy.

“The two leaders agreed that countries like Pakistan could play a facilitating role in these endeavours and that both sides would remain closely engaged to promote shared objectives,” the statement said.

Meanwhile, the premier underscored the importance of Pakistan’s relations with the EU and conveyed that he was looking forward to his visit to Brussels to meet the bloc’s leadership. “He also extended an invitation to Michel to visit Pakistan,” the statement said.

PM lashes out at EU envoys

The prime minister’s interaction with Michel comes a day after he lashed out at a statement by European Union ambassadors calling on Pakistan to condemn Russia for its invasion of Ukraine.

In a joint letter written to Pakistan last week, the ambassadors of 23 countries had asked Islamabad to support a United Nations General Assembly resolution condemning Russia’s aggression and demanding its immediate withdrawal.

“Have you ever acknowledged Pakistan’s support in the ‘war against terror’ which claimed 80,000 lives and caused other collateral damage,” he asked while addressing a public meeting in Mailsi town of Vehari district on Sunday.

“Has anyone of you severed trade relations with India or objected to its unlawful actions?” he questioned, adding, “are we slaves and act according to your wishes?”.

The prime minister said Pakistan did not want any confrontation with any country and wanted to have good relations with all — Russia, the US, China and Europe.

“Islamabad is not in any camp. We are neutral and make efforts that the Russia-Ukraine war should come to an end at the earliest as it is a great loss to the world,” he said.

The premier also chided the EU ambassadors for not even appreciating Pakistan’s role in the Nato war.

Last week, the UNGA passed a non-binding resolution, demanding the immediate withdrawal of all Russian troops from Ukraine. Out of five South Asian nations, only Nepal voted for the resolution while Pakistan, India, Bangladesh and Sri Lanka decided to abstain.

Pakistan’s Ambassador Munir Akram had also asserted in the UN that Islamabad supported all efforts to restore peace in Ukraine. “We are advocating a ceasefire and negotiations. If we had joined the Ukraine resolution, we would have no political space for diplomacy between the two sides,” he had asserted.

The message from Karbala 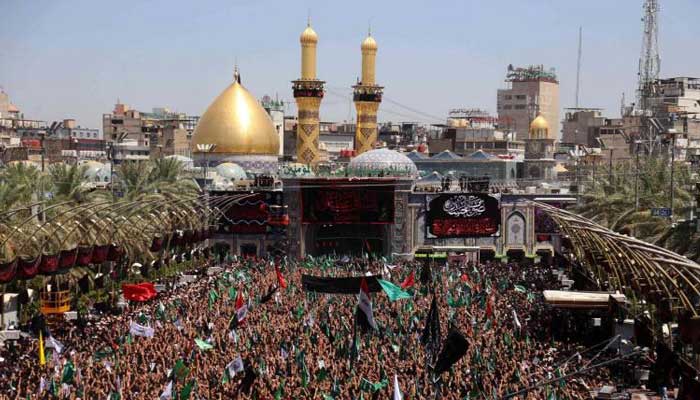 As millions of pilgrims converged upon Karbala, southern Iraq this week to observe ‘Arbaeen’ or ‘Chehlum’ – the 40th day after the massacre of Imam Hussain (RA) and his followers more than 1,400 years ago, the event carried multiple lessons that have served Muslims worldwide from centuries past to this day. The observance takes place across Pakistan today [Saturday] with gatherings of mourners planned in numerous urban and rural centres.

Together, these events are a powerful reminder of the aftermath of the resistance by Prophet Mohammad’s (PBUH) grandson Imam Hussain (RA) who refused to accept allegiance to Yazid ibne Muawiya, the Damascus-based caliph of the time. So powerful was Yazid’s yearning for an overkill to suppress Imam Hussain and his followers that he dispatched anywhere between 30,000 and 70,000 soldiers for an encounter with a handful of opponents no more than 72, according to different historical accounts. And yet, the defiance shown by Imam Hussain (RA) and his small group of followers remained unwavering.

But the carnage on that day just did not end the clash between two vastly opposed individuals and their followers, each armed with a radically different view of the world. In brief, the encounter at Karbala far from a military battle was instead a conflict between vastly opposed ideas.

As Mohamed Ali Albodari wrote in ‘Understanding Karbala’ – abridged and adapted from the original work by The Grand Ayatollah Sayyid Muhammad Saeed Al-Hakeem: “He [Imam Hussain] wanted to draw a clear example of a righteous statesman, so that the public can see the villainous and deviant nature of the others by comparison. He aimed to create a clear and unequivocal distinction between the true teachings of the Prophet [PBUH] and the fabrications that had been popularized by the chieftains before and after him. In this he was successful”.

The same division of ideas was successfully put on full display even after the massacre at Karbala. Bibi Zainab (RA), the younger sister of Imam Hussain (RA) took up the mantle of leadership of the women, children and a sole surviving adult male, Imam Zainul Abideen (RA), a son of Imam Hussain who was too frail to go into battle. In brief, she is still remembered as the heroine of that monumental tragedy.

They were all seized after the encounter, their tents were burnt, they were kept in inhuman conditions and forcibly taken first to Kufa and then to Yazid’s court in Damascus. Along the way, many infants and young children fell from their camels and died instantly. To this day, there are no reliable historical accounts of exactly how many of the victims from Karbala began their journey and the numbers who survived.

The prisoners of Karbala along the way were introduced as family members of dissidents who fought the army of Yazid and were killed in battle. Indeed that was a powerful display of disinformation and censorship at its worst in the early days of Islam.

And yet, the credit for the powerful remembrance to this day must go to Bibi Zainab (RA). Her eloquence, displayed repeatedly during the journey from Karbala onwards has been widely characterized as a shining example of her determination to not only spread the message of her brother Imam Hussain (RA) but also to stand up as the de facto leader of the survivors of Karbala. Bibi Zainab has been widely celebrated in poetry and literature across languages as a pivotal figure in the journeys to and from Karbala.

Father Christopher Paul Clohessy, a South African Catholic missionary in his widely acclaimed title; ‘Half of my heart – the Narrative of Zainab, Daughter of Imam Ali (RA)’ commended Bibi Zainab (RA) when he wrote; “In her decisive role as spokesperson for her brother’s cause, she became the first to drive the adversity of Karbala into perpetuity by moving her brother’s creed and conviction off the battlefield and into the palaces of Kufa and Damascus, not only completing Imam Hussain’s [RA] ‘jihad’ [holy war] but becoming the agent through whom Karbala would become undying”.

Clohessy has gained respect for his research on Islam, notably also with a title dedicated to Bibi Fatima (RA), the daughter of Prophet Mohammad (PBUH). He provides a vivid account of the central role of Bibi Zainab (RA) in the story of Karbala.

To this day, the sermon of Bibi Zainab (RA) in Yazid’s court stands out as a unique example of a captive ignoring the very likely risk to their own life and bluntly rebuking their captor in an open court. Clohessy acclaims Bibi Zainab (RA) for the long-term impact of her words on her immediate surroundings and well beyond: “Zainab [RA] meets the needs of the hour, advancing her brother’s principles and so altering the course of history, assuring devotees that they can face the future with strength, courage and wisdom”.

The all-too-powerful impact of the tragedy of Karbala was witnessed yet again this week as anywhere between 15 million and 25 million pilgrims, according to different accounts, passed through the city. Exactly how such a massive buildup is absorbed in a city with a size that can only take far fewer remains an unresolved mystery.

The final convergence of pilgrims upon Karbala on ‘Arbaeen’ was preceded by many setting out on foot from the holy city of ‘Najaf’, walking a 100-km distance along a road that becomes increasingly alive around the commemorations of Karbala. There are roadside volunteers who are eager to offer foot massages free of charge while affluent businessmen host well-stocked rest and eating places every half a kilometre. Unlike challenges in daily lives for Iraq’s mainstream population, makeshift medical camps along the route readily serve any pilgrim in need.

The most powerful message that continues to resonate from Karbala to this very day is just one: that truth and righteousness indeed prevail, irrespective of the passage of time.

Gold price rises by Rs200 per tola in Pakistan KARACHI: Despite the appreciation of the Pakistani rupee against the US dollar, the gold price in Pakistan extended gains on Friday.

Moreover, the demand for gold is slightly picking up pace due to the ongoing wedding season.

Meanwhile, silver prices in the domestic market remained unchanged at Rs1,520 per tola and Rs1,303.15 per 10 grams today.

In the international market, gold prices steadied but were set for a fourth straight weekly drop, as the US dollar resumed its rally. At the same time, the focus shifted to US non-farm payroll print that could influence expectations of interest rate hikes.

US gold futures firmed at $1,739.90. The dollar was set for its second consecutive week of gains, making bullion less attractive for overseas buyers.

Maulana Tariq Jameel needs ‘prayers’ as he departs for Umrah Renowned religious scholar Maulana Tariq Jameel said Wednesday he was departing for a pilgrimage to the Kingdom of Saudi Arabia.

“After 2 years, travelling to Saudi Arabia for performing Umrah. Your prayers [are] needed,” the religious scholar said in an Instagram post.

The oil-rich state allowed entry into the kingdom to foreigners for Umrah after a gap of two years in light of the falling coronavirus cases. This year, however, a large number of Umrah pilgrims from different countries arrived in the Kingdom after the coronavirus situation was controlled to a considerable extent.

The Saudi Arabian Ministry of Hajj and Umrah had earlier this month announced that the Umrah season would continue until the end of the month of Shawwal, i.e. May 31.

During this period, the Kingdom will allow foreigners wishing to perform Umrah to enter the country, the ministry said, adding that the issuance of Umrah visas will be stopped once the preparations for the Hajj season begin, i.e. on the 1st of Zeeqad.