LAHORE: Pakistan all-format captain and the most successful batter in the history of the Pakistan Super League (PSL), Babar Azam, will don Peshawar Zalmi colours in the eighth edition of the PSL.

With 2,413 runs under his belt in 68 matches, the prolific right-hander is the all-time highest scorer of PSL.

Babar represented Islamabad United in the inaugural edition of the PSL. Before PSL 2017 players’ draft, Babar was moved to Kings. Since then, he represented the Kings in six PSL editions and also captained the franchise this year.

The tournament will run from February 9 to March 19 next year and will be played at four venues — Lahore, Karachi, Rawalpindi and Multan.

In one of the biggest trades of the tournament, 2017 champions Zalmi snapped Babar in the Platinum category and the first pick in the supplementary round for Haider Ali and Shoaib Malik who move to Karachi Kings, the winners of the 2020 edition, in Platinum and Diamond categories, respectively, before the trade and retention window closed on Friday evening.

During the trade and retention window, a side can assemble up to eight players before the PSL Player Draft, in which it can increase the squad side to 18 players — three each in Platinum, Diamond and Gold categories, five Silver, two Emerging and up to two Supplementary categories.

Babar, who was at Islamabad United before moving to Karachi Kings, is the only player in the Platinum category for Peshawar Zalmi.

Wahab Riaz and Sherfane Rutherford are in Diamond, while Mohammad Haris, who has lightened up the ICC Men’s T20 World Cup with his fearless batting, is in Gold.

Zalmi are the only side to retain seven players.

Haider is Karachi’s only player in the platinum category, while Shoaib joins Imad Wasim and Mohammad Amir in the Diamond.

They have retained Sharjeel Khan, Mir Hamza and Aamir Yamin in the Silver category and Qasim Akram in the Emerging.

Lahore Qalandars, the defending champions, have kept retained Shaheen Afridi, their captain, and Rashid Khan in the Platinum category. All-rounder David Wiese stays in the Diamond category. While Lahore have retained seven players, they will announce their eighth retention in due course.

Multan Sultans, the winners of the 2021 edition and the finalists in the last one, have retained middle-order batters Khushdil Shah and Rilee Rossouw in the Diamond category and Tim David in Gold.

Their captain Mohammad Rizwan, the highest run-getter in T20Is since the beginning of 2021 and the player of PSL 2021, is their only retention in the Platinum.

Islamabad United, the winners of the inaugural and third editions in 2016 and 2018, have retained their captain Shadab in the Platinum category. They have kept two players in the Diamond with Asif Ali being named as the Brand Ambassador and Mohammad Wasim Jnr. Azam Khan, Faheem Ashraf and Hasan Ali will continue with United in Gold.

Quetta Gladiators have retained Mohammad Nawaz, who has been with them since the inaugural edition, in the Platinum.

Jason Roy and Iftikhar Ahmed are retained in Diamond category. Their captain Sarfaraz Ahmed and Mohammad Hasnain (Brand Ambassador) are in the Gold category.

As it was last year, each of the six sides will have the Right to Match Card that will allow them to pick any player released from their roster during the draft.

The details of PSL Player Draft 2023 will be announced in due course.

Meanwhile, leading T20 cricketers from around the globe have registered themselves for the PSL Player Draft 2023. Four hundred and ninety-three players, of which 29 are in the Platinum category and 81 in Diamond (names below), from both full member and associate nations, have made themselves available for the player draft. 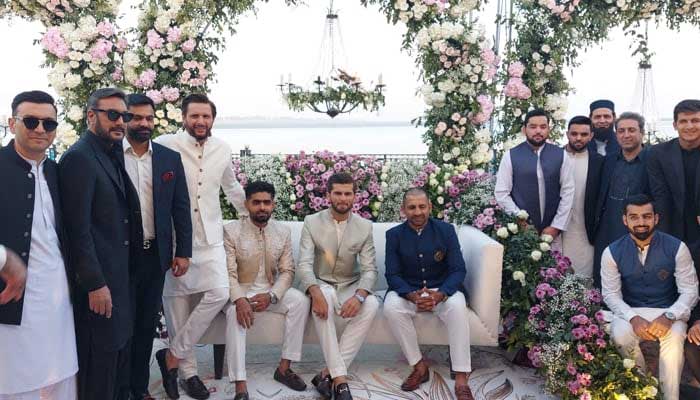 Maulana Abdul Sattar performed the Nikah at the Zakaria Mosque, while the bride’s rukhsati will take place later.

Soon after the Nikah, a reception was also held where cricketers Babar Azam, Sarfaraz Ahmed, Naseem Shah and Shadab Khan, as well as squash legend Jahangir Khan, were among the attendees.

Asim Bajwa, the former director-general of the Inter-Services Public Relations, was also present at the occasion along with Wasim Khan, the General Manager of the International Cricket Council.

The pair was engaged two years ago.

Speaking in an interview on Geo News’ show “Aik Din Geo Kai Sath”, the left-armer revealed that it was his wish to marry Afridi’s daughter.

“It was my wish and Alhamdulillah [thanks to Allah Almighty] it is fulfilled now,” Shaheen said while blushing during the interview.

When asked whether Ansha felt jealous about his female fans, the 22-year-old cricketer said: “I am not sure, maybe she feels something like that.”

The host asked the young pacer about upsetting his numerous female fans after getting engaged so soon, replying to which he said: “I found my heart and that’s enough for me.”

With his team Lahore Qalandars as the defending champion, skipper Shaheen will be next seen in action during the upcoming eighth edition of the Pakistan Super League, which is scheduled to begin on February 13.

The fast bowler has been in and out of the cricket field for a while in the wake of his knee injury during the T20 World Cup 2022 final against England which was held on November 13. Shaheen is set to marry the daughter of Pakistan’s star player on Friday, February 3.

According to family sources, Shaheen Afridi and Ansha will sign their nikah nama — a marriage contract officiated by a cleric in Muslim weddings — now while the rukhsati (seeing off) will take place later.

Fans will be excited to know that Shaheen and Ansha’s marriage preparations are underway and the groom-to-be and his family have reached the port city. The pacer got engaged to Ansha two years ago.

The sources told Geo News that the Mehndi ceremony will be held tonight in the city of lights.

It is also worth mentioning that the wedding invitation for the ceremony is going viral on social media. However, no one from the two families has verified whether the card is real or fake.

In an earlier interview on the show “Aik Din Geo Kai Sath” on Geo News, the 21-year-old revealed that it was his wish to marry Afridi’s daughter. When the host, Sohail Waraich, asked Shaheen about his engagement and relationship with Shahid Afridi’s daughter.

The cricketer blushed and said, “It was my wish, and Alhumdulillah it is fulfilled now,” he shared.

During the interview, when Shaheen was asked whether Ansha feels jealous about his female fan following, Afridi said he is unsure about it.

“I am not sure, maybe she feels something like that,” the cricketer quipped.

Further, the host asked Shaheen about upsetting plenty of female fans by getting engaged at an early age.

At this, Shaheen said: “I found my heart and that’s enough for me.”

Wedding bells are also ringing for several other cricketers on Pakistan’s national side.

Then on January 20, Shan Masood got married in an intimate Nikah ceremony in Peshawar. Shan tied the knot with the love of his life Nische in Peshawar. Their reception will take place in Karachi on January 27.

Taking to Twitter last month, Khan announced his wedding to the daughter of the current head coach of the national team. Meanwhile, the cricketer also requested people to give space to him and his wife.