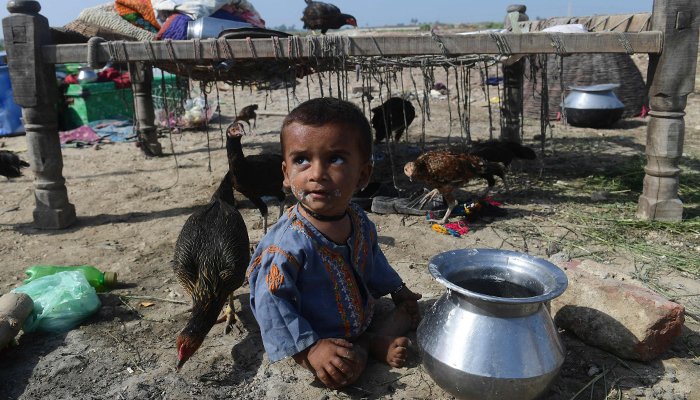 Health experts have sounded the alarm regarding the outbreak of disease in flood-affected areas, estimating around five million people to fall sick in the next four to 12 weeks, The News reported.

People in the flooded areas of Sindh, Balochistan, southern Punjab and Khyber Pakhtunkhwa are likely to get diarrhea, cholera, gastroenteritis, typhoid and vector-borne diseases like dengue and malaria, the health experts warned on Tuesday.

It is estimated that a disease outbreak would initially require medicines and medical supplies worth Rs1 billion, they said, and urged donors, philanthropists and common people to donate these after consulting health experts and officials of rescue and welfare organisations.

“Of the 33 million people affected due to monsoon rains and floods across Pakistan, it is estimated that around five million people, including children, would get sick due to outbreak of water-borne and vector-borne diseases in the next four to 12 weeks.

“As there is no clean drinking water available in the flood-ravaged areas, there is a risk of outbreak of diarrhea, cholera, typhoid, gastroenteritis, dengue and malaria,” renowned public health expert and Vice-Chancellor of the Health Services Academy (HSA) Islamabad Dr Shahzad Ali told The News on Tuesday.

He said children would be more vulnerable due to weak immunity and warned that an outbreak of acute watery diarrhea, and other water-borne diseases could kill hundreds of children and adults if immediate preventive measures were not adopted.

“There is an urgent need to vaccinate all the people in the flood affected areas against typhoid-cholera. This vaccine is available in the country and it can be deployed to prevent deaths from typhoid and cholera in Sindh and Balochistan. Similarly, prophylactic treatment of malaria should also be started to prevent deaths from the vector-borne disease,” Dr Khan said.

Urging the authorities to make anti-snake venom and anti-rabies vaccines available in abundance, he said hundreds of incidents of snake-bite and dog-bite had been reported from KP, Sindh and Balochistan.

Former health director-general and an expert on infectious diseases Dr Rana Muhammad Safdar was of the opinion that children in the flood affected areas were the most vulnerable and needed immediate medical attention, saying immunisation programmes of the provinces should reach out to unvaccinated children.

“In addition to diarrhea and other water-borne diseases, children are at the risk of getting measles which can spread like fire among the displaced populations. Polio is another threat and unfortunately, we have seen wild poliovirus 1 circulating in many cities of KP and Punjab, while it can travel to the other cities where it has not yet been found,” Dr Safdar said.

On the other hand, officials of the welfare organisations working in the flood-hit areas said a large number of people, including women and children, had already started suffering from water-borne infections, including diarrhea, gastroenteritis, cholera, fever, flu, allergy, scabies and other fungal skin ailments.

“We also believe that around Rs1 billion would be required initially to meet the medical needs of sick people in the flood-hit areas as hundreds of people are getting sick due to water-borne and vector-borne diseases in these areas,” said Sufyan Ahmed, Managing Director of the Al-Khidmat Health Foundation, who is coordinating with the charity and welfare organisations for relief operations in the flood-hit areas across Pakistan.

According to Ahmed, in the absence of any guidelines, a huge quantity of unwanted medicines were being donated which go to waste or are misused in the name of flood victims.

“In these circumstances, we have prepared guidelines for relief operations with the assistance from Pakistan Society of Health-System Pharmacists. These guidelines provide a complete list of medicines, medical supplies and other stuff that is needed by the patients in distress at the moment,” Ahmed said.

He then referred to the guideline which carried details of several medicines for anti-infectives (oral), cough and cold preps, pain/colic, fever management (oral), pregnancy or female care, antacids, wound dressing, vomiting/nausea (oral), anti-diarrheal (oral) and others as basic first aid supplies. The list also identified several medicine supplies for the healthcare units, which are required in the flood hit areas.

The health authorities, he said, were also coordinating with the local pharmaceuticals and charity and welfare organisations to help them reach out to the affected areas in dire need of medical supplies.

“One such engagement was facilitated between local pharmaceutical company Pharmevo and Al-Khidmat Foundation and the former is providing Rs5 million medicines to the latter for the affected areas of Sindh and Balochistan in the first phase,” he said. “It’s a gigantic task and the government alone cannot handle the situation. So we are engaging all individuals and organisations and channelising the operation for effective results.”

The fresh initiative, he said, was aimed at giving patients access to basic clinical services for their medicinal needs, better than what the local infrastructure has to offer in a very disastrous situation.

Cataclysmic floods in Pakistan kill over 1,100, including 380 children